Why International Beauty Brands Are Piling into South Korea

Global players from Givenchy Beauty to Sephora are targeting the growing opportunity in South Korea, but a phalanx of homegrown brands stands in their way.

SEOUL, South Korea — Walking down the streets of Seoul, it’s impossible not to see the vast influence of K-beauty, shorthand for South Korea’s local beauty industry. The bustling Myeongdong neighborhood features homegrown cosmetics shops touting snail slime, a signature ingredient in Korean beauty products whose promises of glowing skin, wrapped in appealing packaging, have hooked consumers in the country and beyond.

In the past five years, K-beauty exports have grown from $1 billion in 2012 to $2.64 billion in 2017, according to the Korea Customs Service. The surge has gone hand-in-hand with hallyu, a South Korean cultural wave that has swept the globe, especially in China. But despite the upswing, Korean brands are facing increasing competition at home from global luxury players.
In July, LVMH-owned Parfums Givenchy opened its first beauty store in Korea at the Hyundai department store in Apgujeong, a trendy luxury shopping district in Seoul. A second store followed a month later in the university district of Sinchon. On offer were nearly 200 types of beauty products, including makeup, skincare and fragrances.
Hyundai, which also sells beauty lines stamped with brands like Chanel, Dior, Yves Saint Laurent and Tom Ford, stocks the largest number of luxury beauty brands in Korea. Meanwhile, LVMH beauty giant Sephora plans to opens its doors in Korea next summer and has recently advertised on LinkedIn roles such as a human resource manager, supply chain manager and performance marketing manager linked to store openings in Seoul.
There’s certainly plenty of opportunity in Korea for global cosmetics companies. Worth an estimated $13 billion, South Korea’s beauty market is among the world’s top ten, making it a “critical” region for global fragrance and cosmetics players, said Liz Flora, editor of Asia Pacific research at Gartner L2, a business intelligence firm. 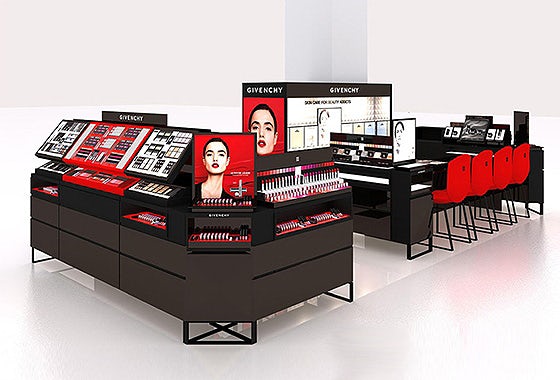 “Today, people aren’t only looking at Seoul Fashion Week; the beauty industry has grown, and it’s overtaken the fashion industry,” said Jung Kuho, executive director of Seoul Fashion Week, crediting the shift to the influence of hallyu along with beauty’s big budgets to court and sponsor famous K-pop stars. “10 years ago, sales of fashion were much higher than cosmetics. Now, that’s not the case.”
Per capita beauty spend in South Korea in 2017 was $45, according to Mintel, compared to $43 in the UK and $37 in the US, and more than double the global average of $21. With a projected CAGR of 8.1 percent over the next five years, the market is estimated to reach $2.8 billion by 2020. “The Korean beauty market remains buoyant thanks to highly engaged consumers who don’t hesitate to adopt novel products,” said Mintel senior beauty analyst Jane Jang.
For international luxury players like Parfums Givenchy, an approximately $350 million business, according to market sources (LVMH does not break out numbers for the brand), Korea is an attractive market, not only because of the spending power of its consumers, but also due to the country’s status as a popular holiday destinations for other Asians, in particular, Chinese consumers, which account for over $500 billion yuan ($73 billion) in annual spending, representing almost a third of the global luxury market, according to McKinsey & Company.
“Korean beauty consumers are the most sophisticated and well-educated in the world. But a lot of foreign beauty brands also regard Korea as a test market for their Asia or China market launches,” said Julia Kang, publisher at Hearst-Joongang, which owns titles like Elle Korea, Cosmopolitan Korea, Harper's Bazaar Korea and Esquire Korea. Givenchy declined to comment.
"The Korean market is one of the world’s most digitally savvy, with an incredible 99.2 percent internet penetration rate."
Kang added that improved relations between China and North Korea have energised local businesses. Tourism numbers plunged in 2017 after South Korea angered China by deploying a US Terminal High Altitude Area Defence (THAAD) system, which Beijing officials viewed as another American effort to contain China. But the two countries have been mending their ties and duty-free sales registered 34 percent year-over-year growth by the third quarter of 2018.
However, global players will run up against the sheer power of Korean conglomerates like LG Household & Health Care, the leading cosmetics company in Korea in terms of market capitalization, and rival Amorepacific, Korea’s biggest cosmetics firm by sales. Can they truly compete in a market where homegrown brands have typically dominated?
“Korean people still love the big French brands, because it’s luxury. Customers are still hungry for that,” said Hearst’s Kang. However, she noted a change in the way local consumers shop. “It’s become a recent trend to shop in beauty stores on the streets in areas like Myeongdong or Garosugil. Five or 10 years ago, people would go to department stores. Now, young people are shopping on the streets or they go to Olive Young,” she added, referring to Korea’s top beauty specialty store with a focus on masstige products, equivalent to Boots in the UK or Ulta in the US. 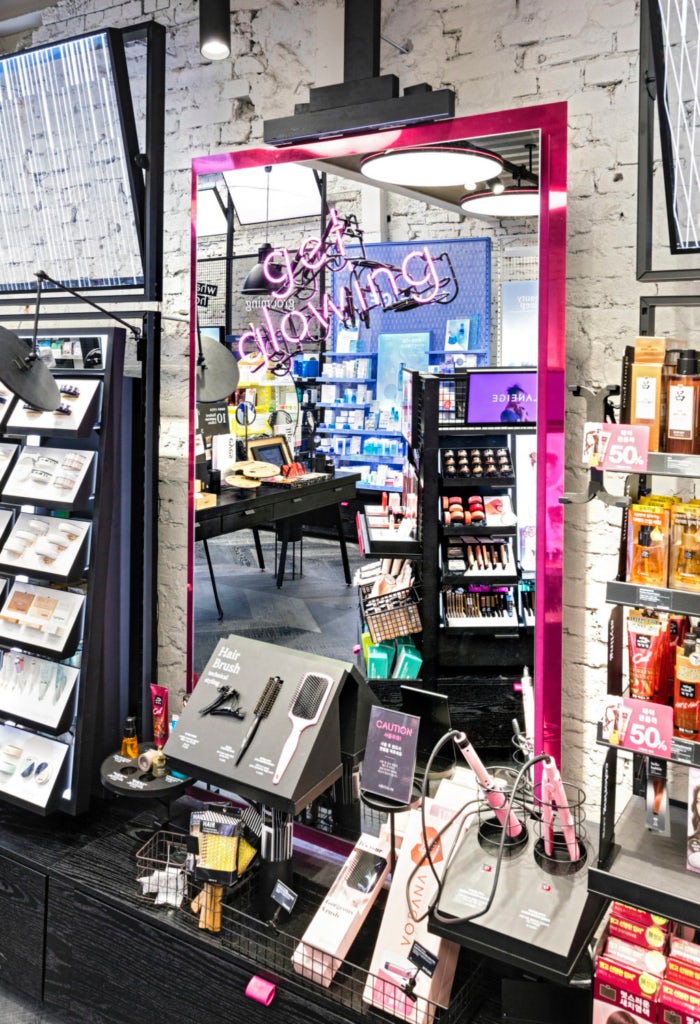 Amorepacific's multi-brand store Aritaum | Source: Courtesy
Sales at monobrand stores have also suffered. “Korea’s cosmetics landscape has recently evolved towards competitive multi-brand stores after years of monobrand ones,” said Florence Bernardin, an Asian cosmetics market specialist, who consults for brands like Shiseido. Boots entered Korea last year, while conglomerate Shinsegae recently launched multi-brand cosmetics retailer Chicor, which mixes local brands with international prestige ones. Amorepacific’s Aritaum mall, which promotes the group’s own masstige brands, also reopened in September with a new concept focused on in-store services and experiences.
However, department stores and the luxury beauty brands that sell with them can still gain a slice of the pie by turning to online channels, which have been experiencing rapid growth since 2010. Since the Korean market is one of the world’s most digitally savvy, with an incredible 99.2 percent internet penetration rate and the fastest internet speed in the world, global brands must invest in e-commerce, social and search strategies that respond to local demands.
Unlike Amazon’s gargantuan status in the US, no single retailer makes up more than 10 percent of online sales in South Korea. Gmarket, a leading online shopping site operated by eBay Korea, currently leads the country’s highly fragmented beauty e-commerce space with a market share of only 8 percent, according to L2. But discoverability on these online sites can be challenging for global beauty brands, particularly marketplaces like Gmarket, where they compete against third-party sellers also offering their products.
Global brands also need to think about localised platforms. Only 34 percent of global beauty brands operate an official account on Kakao Talk, South Korea’s largest mobile messaging app, with almost 50 million monthly active users globally as of January 2018. Although it is still short of Japan’s Line, which has 78 million monthly active users worldwide and China’s WeChat, which hit 1 billion this year, the app takes up 94.4 percent of the total time users spend on mobile messaging apps in South Korea. Instagram’s popularity has also been significantly increasing, becoming the primary social media platform for 22 percent of Koreans in 2017, up from 4 percent in 2016.
“Local brand Laneige is blowing global competitors out of the water — it takes up 35 percent of all interactions among premium beauty brands, while Estée Lauder and Benefit [in second and third place, respectively] only take up 9 percent combined,” said Gartner L2's Flora. With more than 213,000 followers on Kakao Talk, Laneige’s posts generate 2,320 interactions on average, 5 times larger than any of its premium competitors.
"Unlike Amazon’s gargantuan status in the US, no single retailer makes up more than 10 percent of online sales in South Korea."
Global players can catch up with local competitors by offering product education features. Most K-beauty brands currently offer guided customer service — a key feature for Korea's sophisticated consumers who are interested in knowing everything about the product and many of whom take an interest in natural ingredients — on their sites. Meanwhile, brands on Kakao offer a click-to-call option and live chat features, as well as omnichannel promotions such as coupons that can be redeemed in-store as a way to attract foot traffic, and the ability to let customers make reservations for in-store services.
In order to reach local consumers, these are vital features that global brands need to consider, said Flora. “South Korean brands are also more likely than global brands to have ingredient lists on online product listings,” she continued, noting that 62 percent of K-beauty brands have an ingredient library page on their site compared to 10 percent of foreign brands. Many Korean brands also have content showing the product in-use, including demonstration and before-and-after photos.
“Consumers are very digitally connected and highly knowledgeable about products and ingredients, so international brands need to step it up and [leverage] the social, search and e-commerce platforms that are most influential in the market,” she said.
By Kati Chitrakorn December 19, 2018